Many of you are probably aware of my obsession with making seasonal playlists. What started out as a way to give my friends music in high school has turned into a regular exercise to keep track of the music I like at a specific point in time. As of writing this post, I’ve made 30+ individual playlists which span the range of time from sophomore year of high school to today. Each playlist runs about 80 minutes, or 18-21 tracks, which is the amount of running time I could put on a CD-R. I closed the book on the most recent one only a few days ago.

My real job in the adult world is not to curate playlists, but instead to analyze data and report on it. For years, I’ve been looking for a way to combine my playlists with my interest in analytics – and, by sheer luck, this month I’ve found it. Paul Lamere (@plamere on Twitter) builds music recommenders at Spotify, and he previously worked for Boston based music data company, the Echo Nest. In his spare time, Paul creates powerful programs using the Spotify API, most notably this Sort Your Music tool which takes any playlist you’ve made and spits out Echo Nest musical traits on each of the songs in the playlist. The real point of the tool is to be able to arrange the songs in a playlist by a certain trait, like BPM, Valence (mood), Length, Danceability or general popularity, but I found that it had more interesting use cases as well.

Seeing this data inspired me to pursue an exercise of my own – what sort of things would I find out about my musical tastes if I put all 33 of my seasonal playlists (totaling over 700 songs!) into the Sort Your Music tool and analyzed the results? Would I be able to see my musical tastes changing over time? What would I learn about myself? It turned out to be an extremely worthwhile exercise. Here are some of the more interesting things that I found after throwing all the data into Tableau.

Loudness: Turning Down the Volume

The chart above shows Average “Loudness” where a larger negative number corresponds to a softer sound. Darker greens mean an average song on that playlist was softer, dark red means an average song was louder. For the most part, you can see that basically all of high school and college is consistently in the red, which means I preferred listening to louder songs during that time. But then, after graduating, my tastes suddenly shifted to preferring softer music on average. For some context, I did go through some tough times in the Fall of 2013 which I thought would have an impact on my tastes, but I didn’t think that the impact would be so significant.

BPM: Slower Songs are Taking Over

With the average song having a BPM of just over 110, my Fall 2017 playlist is the slowest one since I began making these playlists 11 years ago. In fact, just looking at the slower playlists (colored green in the chart above), five of the seven slowest playlists have occurred in the past two and half years. Not only are the songs I like getting softer, they’re getting slower as well.

One other note of interest: two of the quickest paced playlists occurred in Fall 2009 (my first semester at college) and Fall 2013 (aforementioned issues/beginning to work full time). These two playlists correspond to two of the most stressful times in my life, specifically, times where lots of changes were happening.

Not only was my Fall 2017 playlist the slowest playlist I’ve ever made, it also contained the longest average track lengths. The music I like is not only getting slower and softer, it’s appears to be getting longer too. One caveat – this metric has much more variability than the other charts I’ve presented so far – for instance, just one year ago, the average length of a song was around 3m20s.

Valence is what the Echo Nest/Spotify calls Mood. A higher valence corresponds to a happier mood and vice-versa. According to the songs I’ve included on my seasonal playlists, I’ve been listening to consistently happy music over the past two years. The jump in average valence would seem to align with when I moved in with my girlfriend in the Fall of 2015.

Release Date: Exploring the Past 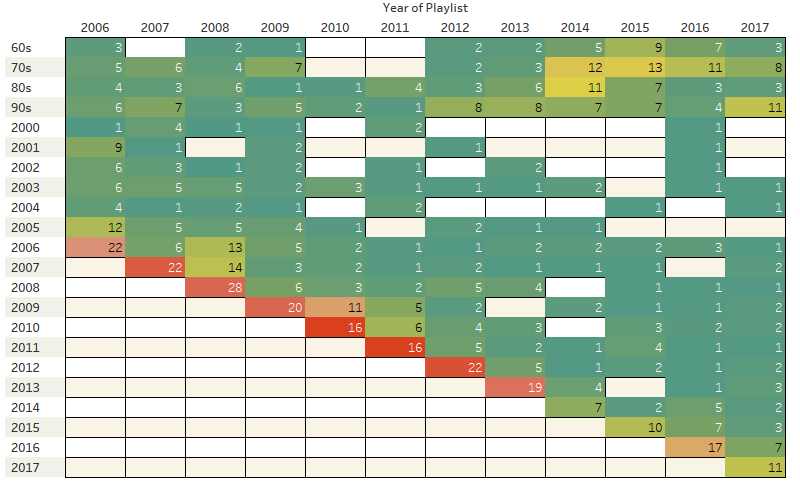 Finally, the above chart looks at the number of songs by their appearance on a playlist (horizontal/top axis) versus their original release date (vertical/left axis). Reading down the chart, a brighter/redder color means that that there’s a higher percentage of songs with that specific year of release. In High School and College, I was mainly focused on including newer/current songs on the playlists – which makes sense since I was spending a lot of time exploring new music to keep up with trends and my friends interests. Since 2014, however, there’s been an increased interest in older songs, which aligns with when I started listening to the Rolling Stone Top 500 Albums of all time (I finished that project in 2016), and becoming a Spotify user where I had easy access to older music.

Thanks for reading! Make sure to check out more of Paul’s work at Music Machinery