More than a decade before Green Day made rock operas and politicized their music, they were just a trio of teenagers cutting their teeth at the underground punk scene centered around 924 Gilman St in Berkeley, California. Unlike many of their contemporaries at the time who relied on intense, hardcore themes in their music, Green Day fused punk aesthetic with poppy hooks and melodic and accessible choruses. The two independent records they released on Lookout Records during this time, the compilation 1,039 Smoothed Out Slappy Hours and their sophomore album Kerplunk, were statements of intent from a band whose potential at the time seemed to be endless. Before long, a successful grassroots campaign and an East Coast tour had garnered the attention of major labels who were looking for new bands in the wake of Nirvana’s success. Despite being considered a “sell out move” by their devoted Gilman St. fans and the underground punk scene, the band eventually decided to sign with Reprise Records and producer Rob Cavallo in 1993. After a year of development, the band released their major label debut, Dookie, in Feburary 1994 to overwhelmingly positive reception. Even in the wake of their mid 2000s resurgence, it still remains Green Day’s best selling studio album, with over 20 million copies sold.

I recently spun my copy of Dookie and was reminded of how many definitive and genre defining cuts this album contains, such as “Longview,” “Basket Case,” “She,” and “When I Come Around,” though nowadays I find myself liking the album tracks more than the hits – mainly because I played the hits to death in high school. Songs like “Chump,” with its building instrumental freakout, the machine gun drum intro on “Burnout” and the dramatic shift in “F.O.D.” all stand out to me now as my favorites on an album that’s honestly full of them. What’s even better is that no song on Dookie crosses the four minute mark, and only three cross the 3 minute mark, making the album a quick listen, although it is extremely repeatable.

The vinyl copy of Dookie I have is the 2012 “translucent green” repress that was originally a Hot Topic exclusive, but I got new over at Insound for much cheaper than list price a few months ago. Unsurprisingly, the pressing sounds dynamite, especially when its played loud over my speakers. All the instruments really pop and makes me think about how well Rob Cavallo did polishing and streamlining Green Day’s sound. The green color mimics the original promo vinyl records that Reprise sent out in the mid 90’s to radio stations and contest winners, and I think the color suits the album well, although it doesn’t have as much of an effect on a dark colored turntable pad. In the pictures below, I put the record in front of a white screen so you can clearly see the green color. 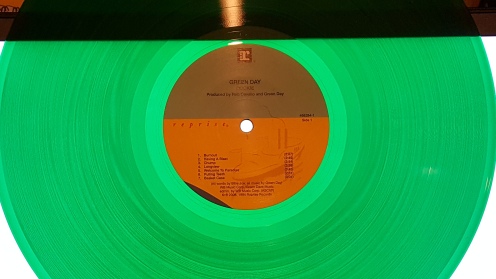 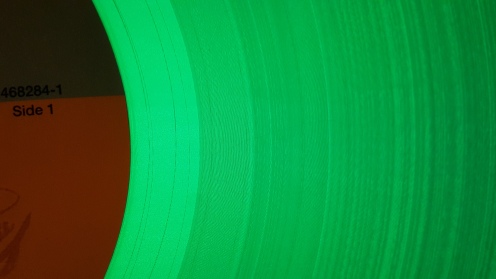 The front cover, full of hand drawn characters that reference everything from their Gilman Street days to people and other artists that the band idolized, is reproduced in stunning detail on this copy, the hues of the cover are dark and not washed out, which is something I’m especially happy with.

The outer sleeve is a standard horizontal sleeve, with the record being housed in a standard white paper inner sleeve. Not much else is included in the package besides the LP itself, which is a little disappointing considering the importance of the album itself, but there is a glossy lyrics sheet with some promotional pictures of the band from the mid nineties that makes you think about how far the band has evolved in only a few years (for better or for worse, opinions vary).

I was three years old when Dookie first came out, so obviously, I really didn’t get into Green Day until American Idiot brought them back into the mainstream when I was in eighth grade. The second album I ever bought with my own money was International Superhits!, a compilation which proved to be a great starting point for digging back into their older hits. Quickly, I became known as the kid who only listened to Green Day in my group of friends – because that’s what I pretty much did for a good year or so as I entered high school. It’s a little embarrassing now looking back on those days and being so passionate about Green Day around so many people, but what can I say? I latched onto the band and their music, and never looked back. A conversation that I had with a lot of people during that time was which era of Green Day was “better,” and at that time, I vehemently defended American Idiot because it had more of an effect on me personally in terms of shaping my musical tastes and being the soundtrack to my teenage years. But now, being a fair bit older, I find myself looking back to older Green Day albums like Dookie and am just floored by how much fun these three guys from the East Bay were having.

One thought on “On Wax: Dookie”